Am I in the Solano Subbasin?

Do you want to know which Groundwater Sustainability Agency (GSA) area you are in? Click Here to access an interactive map of the Sonalo Subbasin where you can type in an address to see the GSA area for that location. After entering an address, the map will zoom into that location and the corresponding GSA area will be listed in the left column. This is based on best available information – if you have any questions about your GSA area, please contact the appropriate GSA.

The following is a downloadable map of the Solano Subbasin and all GSA boundaries.

The Solano Subbasin of the Sacramento Valley Groundwater Basin occurs over the eastern half of Solano County in the southern Sacramento Valley, a portion of the larger Central or Great Valley geologic province of California. It has been reported on by federal, state and local entities, including the U.S. Geological Survey (USGS), United States Bureau of Reclamation, DWR and various hydrogeologic consulting firms as contracted by local municipalities for local investigations.

The Sacramento Valley has had tectonically subsiding sedimentary deposits through most of Cenozoic time. Within these sedimentary deposits, fresh groundwater extends to an elevation of -3,000 feet mean sea level (msl) along the axis of the basin. The freshwater aquifer system in the Solano Subbasin, includes a relatively thin alluvial aquifer underlain by the pre-Holocene Tehama formation. The Tehama formation has been differentiated into three segments, including upper, middle and basal zones. Each of these is characterized by patterns of lithology that reflect the processes that influenced their formation. The majority of current municipal groundwater production in the northern Solano Subbasin, including that of the City of Vacaville and Rural North Vacaville Water District, occurs from the basal zone of the Tehama formation. The middle and upper zones of the Tehama formation as well as the overlying alluvial aquifer are utilized on a more distributed basis by individual agricultural and domestic wells, outside of the municipal service areas. It is not currently understood the degree of confinement in the Alluvium and the upper zones of the Tehama, and this will continue to be investigated with further monitoring. The basal zone of the Tehama formation is a confined aquifer system and pumping from this zone results in rapid groundwater level responses.

Recharge of the alluvium comes from direct percolation of rainfall and return flows of applied water by agricultural and municipal users. Recharge of the Tehama Formation is believed to occur in the northwestern area of the County where the formation outcrops. A portion of the recharge to the basal Tehama may be due to leakage from the overlying Quaternary alluvium and upper zones of the Tehama Formation in the outcrop areas. Due to the limited groundwater level record, the ability of recharge from this area to replenish the larger regional basal zone in a timely manner is uncertain.

Am I in the Solano Subbasin? 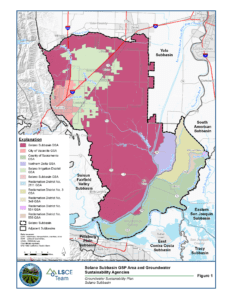 Clicking on the link above will take you to an interactive Solano Subbasin and GSA Boundaries map.